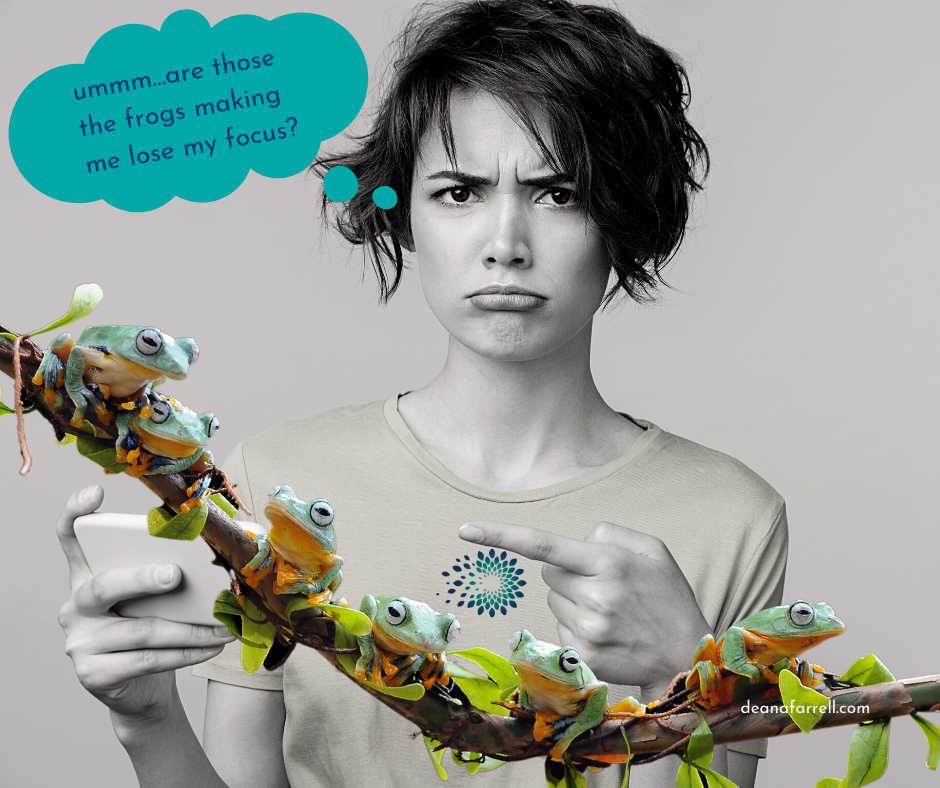 What’s happened to you recently that has snapped you back into putting your focus back where it belongs? For me, it was reading the biblical account of the ten plagues, specifically – the one about the frogs.

Each morning I make it a priority to begin my day in quiet reading and reflecting something from God’s Word. My own history has proven that when I begin with the right mindset, get the best encouragement possible and start my day with truths I can rely on, I’m less likely to wallow or wander through my day.

“I read the paper every day and the Bible every day; that way I know what both sides are up to.” – Zig Ziglar

You’re probably curious about the frogs and what on earth they have to do with losing focus. Rightly so. This is not a combination I would have connected either!

To get the context we have to go back…waaaaay back to the Old Testament. The part that I’ll get to explaining is found in the book of Exodus chapter eight, but to give you some backstory you’ll have to look at Exodus 7. No worries if you don’t feel like looking…I got you.

God: Moses, you and your brother are going to the Pharaoh and tell him to let the Israelites go.

Moses: Okay, what do I say, how’s that going to go?

God: I’ll tell you exactly what to say and what to do. But here’s the thing, Mo, he’s not going to do it – even when he sees for himself all the miracles that I’m about to throw down. He’s not going to listen to you. The result is going to be pretty consequential for his people and they’re going to know who I am and that I mean what I say. In this case, let my people GO!

Moses & his brother go to Pharaoh

Moses: Pharaoh, I’m telling you, if you don’t let God’s people go, some really bad things are coming your way.

The Pharaoh: says and does nothing even after seeing the the very first plague happen before his eyes! As a matter of fact, he walks away from the event and gets MAD!

Okay, now onto the frogs and what they have to do with focus. But first, you need to know that by now Egypt has experienced their first plague. Not only did Moses warn the Pharaoh it was coming if he didn’t let the people go., it was performed right in front of him!

Plague #1 for the curious ones, was that all of the water turned to blood – blech!!! (see Exodus 7:21 if you want details of that experience) It was so bad the the Egyptians began digging holes in hopes of finding fresh drinking water.

Seven days later God tells Moses to go back to the Pharaoh and give him the opportunity to let the Israelites go. Spoiler alert, there are ten plagues recorded, so what do you think the Pharaoh chose to do? You guessed it!

This time Pharaoh has what seems like the wisdom to call Moses back. And for the record, Mo gave the exact details about plague #2 so the Pharaoh had fair warning that the frogs were coming. (and based on his plague #1 experience, he should not have had any doubt that frogs were in his future…)

So Moses answers the Pharaoh’s call to come back after the release of plague #2 – the frogs.

In just a few verses I found some rich lessons for us when it comes to where we can, should and should not put our focus when mounds of pesky frogs have been dumped in our path toward progress!

Friends, this is so much for us.

8 Pharaoh summoned Moses and Aaron and said, “Pray to the Lord to take the frogs away from me and my people, and I will let your people go to offer sacrifices to the Lord.”

LESSONS: 1. Call on who can help you (Pharaoh calls Moses)
2. tell them what you want them to do (Pray, take the frogs away!)
3. reward them for helping you. (Let the people go- what Moses wanted)

9 Moses said to Pharaoh, “I leave to you the honor of setting the time for me to pray for you and your officials and your people that you and your houses may be rid of the frogs, except for those that remain in the Nile.”

LESSONS:
1. Respond to the need with respect (I leave you the honor…)
2. Give recipient control (timeframe – how soon do you want to relieve this pain?)

10 “Tomorrow,” Pharaoh said. Moses replied, “It will be as you say, so that you may know there is no one like the Lord our God.

LESSONS:
1. Don’t hold onto your frogs longer than you have to!!
2. As the helper – resist imposing your choice of course or action

Million Dollar Questions to Ask Yourself

Are the frogs making you lose focus or is it your lack of willingness to take action on the solution?

How many times have we been giving warning signs of potentially disastrous outcomes if not heeded?

What consequences have we suffered both in not heeding the warnings or taking action to the solution?

It’s time to name your frogs that are blocking your path, call on your helpers and take action on getting rid of those frogs!

Paying attention to finding solutions more than the frogs (problems) in your way is certainly a fantastic start. Plus, it will most likely help you avoid the other nine plagues that could be in store if you get caught losing your focus!

fighting the frogs in the way of my focus right there with ya,

Listen to the podcast version of this post here!
In case you are ready to really be rid of the frogs plaguing you…the best way to jumpstart your Focus and a favorite since 2017 is the course Prioritize Focus Bootcamp!